Congratulations to Dunfermline born poet John Burnside who has won the TS Eliot Poetry Prize with his stunning latest work, Black Cat Bone. Here he ponders the lives behind the tiny skating figures in Pieter Bruegel’s Winter Landscape with Skaters and Bird Trap: 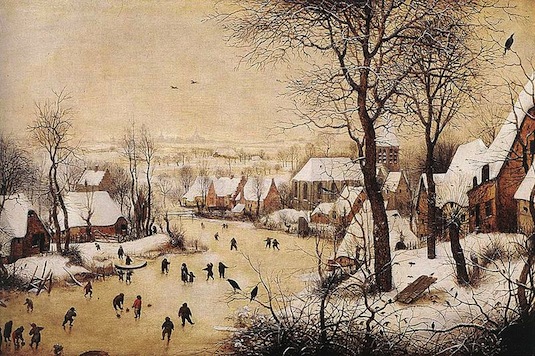 We have to imagine the duties they leave behind

for the thrill of the river,

the kitchens and middens, the sheepfolds and clouded byres,

the old folk in their sickbeds

The day is bright

and this is their escape

but each has his private hurt, her secret dread:

the man who starts thirsty and tired, his body soured

then skates out to the bridge at breakneck speed,

away from the loveless matron he’s had to endure

the woman in blue and grey, keeping pace with her child,

untroubled for now, but never released from the fear

that her husband will catch her wasting his precious time

and beat her as he’s beaten her for years,

the moment he gets her home.

At midstream, the children play

with makeshift hockey sticks and, near the church,

a man finds the thoughtless grace

of the boy he once was to glide free

in the very eye of heaven;

it could be simple – paradise foreseen –

but up on the rightmost bank, amid thorns and briars,

someone has built a bird trap from a plank

set on a perch, from which a length of rope

snakes to a half closed door,

and all around it, birds dip from the air,

It seems a fable and perhaps it is:

we live in peril, die from happenstance, a casual slip,

a fault line in the ice;

but surely it’s the other thought that matters,

the sense that, now and then, there’s still a chance

in nothing but the present, skating out

gifted with the grace

to skate forever, slithering as he goes,

but hazarding a guess that someone else

is close beside him, other to his other. 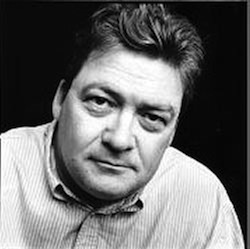 John Burnside is a previous winner of the Forward Prize and saw off stiff competition on this occasion from Carol Ann Duffy and Leontia Flynn. Two other nominees, John Kinsella and Alice Oswald withdrew after the prize’s sponsorship was taken over by hedge fund company Aurum Investment. Burnside was presented with his £15000 prize by TS Eliot’s widow Valerie.