With the 700th anniversary of the Battle of Bannockburn being commemorated this year, a stunning new telling of the Robert the Bruce story has been produced by Edinburgh based publishers Birlinn Books. With text by award winning author James Robertson the book has been illustrated by Scotland’s finest Jill Calder. Jill spent a year working on the illustrations for this book, producing over 174 large sheets of ink drawings and lettering and 5 sketchbooks of notes, drawings and ideas, bringing the final illustrations together digitally.   Jill, who lives in Cellardyke in Fife says, ‘This was new illustration territory – my first picture book (hopefully not last!). I found working on a picture book  a completely different process from the other work I do. I normally work on either quick turnaround jobs, or maybe something for a few weeks, possibly a month or two and then move on to the next job.I worried about getting bored working on this book, due to the long timescale of it, from concept through to working with draft text, to the final push. However, it was completely absorbing and I actually loved doing the research for it and just having one project to think about! Saying that, I did have to have a break from it for about a month because sometimes you need to review your work with fresh eyes and make any necessary edits, tweaks and complete re-workings! Working with James Robertson was a real pleasure. When we met and discussed the content and narrative for the book, I felt he had a real understanding of how an illustrator thinks visually and that made my job just that bit easier! I’d work with him again in a shot! 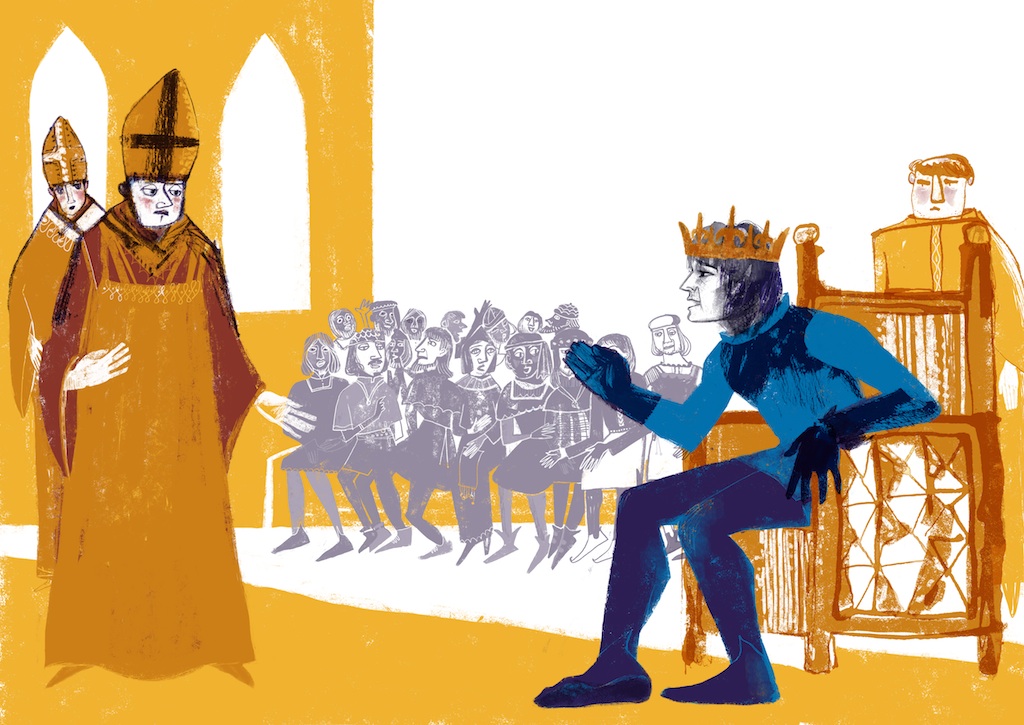 Perhaps surprisingly, the man who wrote the epic And the Land Lay Still describes the book as “really quite minimalist, in terms of the text” and the majority of the space on the page is given over to Calder’s superb illustrations. James Robertson points out that the book is not a novel (graphic or otherwise), nor is it a biography, but rather a straightforward and fairly traditional retelling of the Bruce story. “It’s a careful balance between simple historical facts and the myths surrounding the Bruce story. It’s not intended as a children’s book ( the illustrations are quite dark and bloodthirsty in places) but the highly accessible format means it will appeal to a very wide readership, including those with no prior knowledge of the subject matter.”     If you would like to learn more about how the illustrations for the book were created, Jill Calder will be appearing at Edinburgh International Book Festival with author James Robertson in August.       Robert the Bruce, King of Scots, written by James Robertson and illustrated by Jill Calder, will be published on 1 May by Birlinn Books. It is a 64 page hardback picture book and costs £12.99.

Anna Greta Eker: classic Norwegian design you can get your hands on