by Nicki Slater, The Imagination Workshop

So the house smells like moist compost and all available floor space has been taken over by small green things which we have to be careful not to step on – makes hoovering tricky (shame)!  All the seeds I planted in pots and trays are now showing their first leaves. The runner and borlotti beans are growing incredibly fast. I think if I watched them closely enough I’d actually see them grow.  The pumpkin seeds are like tiny snouts pushing out of the brown soil and the broccoli sprouts look (and taste) like cress.

I have big trays of potatoes laid out to get the sprouts going. This is called 'chitting' and usually happens to my tatties in the cupboard anyway! But apparently you get better results from proper seed potatoes. I’ve opted for four varieties: Desiree, Charlotte, King Edwards and Maris Piper. There are three chances to get tatties in the ground, early, second early and main crop. We’re too late for the ‘earlies’ but should get a good main crop from these guys. 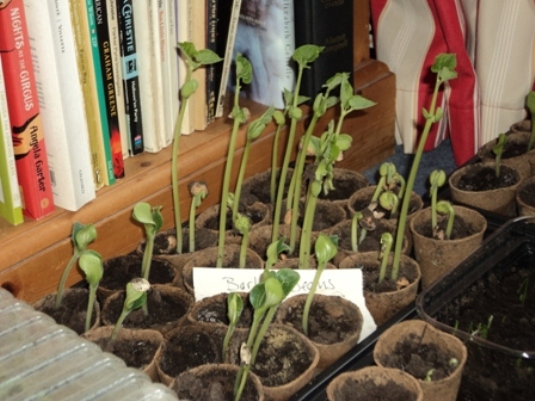 When I bought  the pumpkin seeds I opted for the variety called F1 Racer, which I assumed  would be extra fast growing! I blushed to myself as I read that F1 actually means a hybrid seed which is the first generation of a cross between two different varieties. I’ve discovered helpful videos online by a  lovely man called John Harrison on basics like hoeing (allotment.org.uk) but  there's a dearth of information for Scottish gardeners. I’ve been told to add at least a month onto the times stated in most books. Thank you to the reader who passed on info on Jo Whittingham’s book 'Grow Something to Eat Every Day' after the last post.

I’ve been begging for unwanted tools and thanks to helpful friends and family I’m now proud owner of a hoe, a hose, several forks, a thing with a very long handle and four very short prongs (any ideas?) and a lovely wooden potato dibber from the 1920s. Another piece of new knowledge – a dibber is a big stick for making holes for your potatoes to go in. I did splash out on two purchases: a bee house to encourage bees to the plot and a polythene 'Grow Bag Greenhouse' to protect the tomatoes. 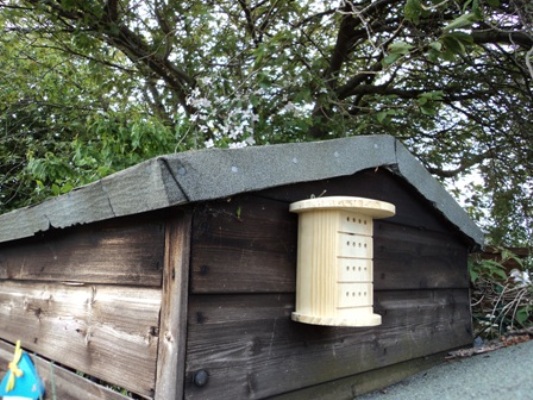 I have taken some soil samples to test the Ph levels (slightly acid to neutral – hooray!). The fruit bushes are growing too and if all those flowers turn to fruit we will have a bumper berry crop. I am also very happy to have a new allotment partner in my friend Lee. We have agreed to half the costs, work load and harvest.

At time of writing I have three days to go until I can actually start work in the allotment. My son Cameron was born 17 years ago and it feels fitting that this new ‘baby' which will need my nourishment and encouragement will be born on the same weekend.  The forecast is for a sunny and hot weekend, just the right for a shed wetting party!