First Ever Create in Fife Awards is sparkling success

When Cellardyke-based jewellery maker, Kirsty Thomas, collaborated with international interiors company Formica she wasn’t to know then it would lead to a Create in Fife Award. Then again, 2013 was the launch of the first ever Create in Fife Awards and on Wednesday 13 November Kirsty, of Lovely Pigeon collected her award beside three other delighted winners. In fact, the diversity of the winners was notable in itself: a new mobile phone app for understanding dementia helped Cactus ID win the Innovation category; Open Studios North Fife picked up the Outstanding Contribution and Best Newcomer was awarded to comedy duo, Suit & Pace who help address mental health issues through comedy.

The Awards Ceremony and Dinner, like Fife itself, was down-to-earth and to the point. Without the sentimental protracted speeches that usually characterise awards ceremonies the event zipped along. The host, Dunfermline-born wildlife cameraman Doug Allan, showed a particularly democratic touch when he invited the Fife College catering staff at the St Brycedale Campus in Kirkcaldy to emerge from the kitchen to be thanked.

The talk at the tables was that Fife has a lot of creative talent but often it was lost in the gravitational pull towards Edinburgh & Glasgow. But there was optimism that this new Awards Event, organised by Fife Cultural Trust in association with Fife College and funded by Creative Scotland, was a significant step towards addressing that.

Nominations for Create in Fife 2013 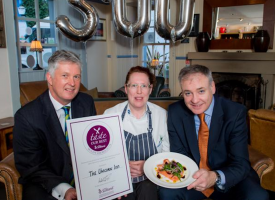 Ulyana Sergeenko – where have you sprung from?

Affordable furniture for small spaces from The Futon Company

At Home in Japan – Beyond the Minimal House

All About Eve and Eva