The witty and the worthy – a New York wedding 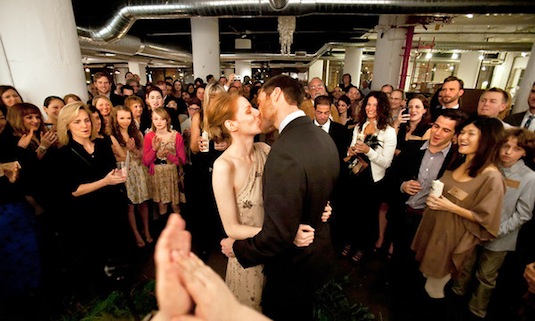 Another entry for our great writing series, here’s an excoriating piece by Ginia Bellafante of the New York Times, ‘reviewing’ a recent NYC wedding. The sharpness of the piece, slightly abridged here, and the awfulness of the occasion are a neat juxtaposition of all that’s irresistable and off putting about the New York intelligentsia – enjoy!

“Recently [in] a loft-like store for arty bibliophiles, David Friedlander, a handsome guy whose career has a 21st-century way of resisting easy description, married Jacqueline Schmidt, an ethereal redhead — a dancer once, a graphic artist now — who seems to run on earnest optimism.

It would be easy to say that the couple, in their mid-30s, abhorred the idea of a traditional wedding, but Mr Friedlander and Ms Schmidt are not the sort of people who are in the business of abhorring things. They did not want their wedding ‘to be just about us,’ the groom told me, but rather, about the world of creativity and social purpose that they inhabit.

During the reception, Mr Friedlander asked his guests to please recycle their cups, ‘because we’re really in a serious situation with climate change.’ There was no guest list in the formal sense; the reception was open to anyone who wished to attend. Friends came, and friends of friends, whom the couple had never met. Before the ceremony in the Brooklyn bookstore, Ms Schmidt walked into the Starbucks at Main and Front Streets and told strangers they were welcome to drop by…

…Few events have so perfectly distilled the essence of a certain New York lifestyle as it is practised right now, one steeped in proselytizing, bohemian entrepreneurialism.

When guests arrived…they were greeted with name tags that asked them to declare a commitment. Lest they not take the request seriously, the hosts had additional cards printed that asked them to ‘Name something you are really committed to.’ The cards contained further imperatives: ‘Name one action you can take in the next 24 hours that is aligned with your commitment.’ Other cards prompted guests toward a treasure hunt in which they were encouraged to meet new people.

Ms Schmidt, who once served as the creative director of [a] children’s cafe in Tribeca that caters to parents in denial about some of the distasteful aesthetics of child-rearing, made the cards in her favored style of heavy stock, neutral paper and quaint typefaces…

…Beyond any of that, though, the wedding was probably the first in the city to be held as a kind of TED conference. After the ceremony…guests sat down to a series of talks, with PowerPoint presentations, on subjects of interest to the couple — ecological efficiency, neuroscience, holistic healing. Those who did not care to listen wandered about eating dumplings and popcorn, which made up the entire nuptial meal.

The evening’s keynote speaker, more or less, was Graham Hill,— the founder of the website Treehugger, and Mr Friedlander’s employer at LifeEdited, where the groom works in marketing and communications. LifeEdited is a commercial enterprise and a movement, one that aims to get people to rid themselves of many of the excesses that industrial living has caused. Mr Hill gave a talk about the importance of personal downsizing, which was largely a talk about his life. (Mr Hill did not seem aware of how unnerving it can be to hear rich people talk about the pleasures of not spending money.)

Ms Schmidt and Mr Friedlander live according to LifeEdited principles, in a small townhouse apartment with a long dining room table, a few Eames chairs, many plants and two cats. Eventually, when they have children, they’d like to have a house, one they would share with other people, where guest rooms and playrooms would be communal…

...There was a time when people like Ms Schmidt and her husband might not have come to or remained in New York — maybe they would have gone to Vermont or Northern California, where communitarian values are taken up more passionately. But they are here now as a classifiable type — opening locavore restaurants, starting co-working facilities, making sustainable crafts — both inspiring us and testing our cynicism. Their strain of progressivism never feels convincingly divorced from ambitious self-promotion. Mr Friedlander and Ms Schmidt pitched their wedding to the media. They saw the event not as an intimate exchange to share merely with close friends and family but as a platform for instructing the world in what they think. (Perhaps this is the logical endpoint of a Facebook culture in which life is lived as perpetual advertisement.)

Ms Schmidt and Mr Friedlander are both children of radical minded ’60s parents. A few days after their wedding, I asked them how they believed they differed from that generation. ‘We’re a lot more driven,’ Mr Friedlander said.”