The smooth, rich voice of Liz Lawrence recalls both Chrissie Hynde and Karen Carpenter and her ability to write an irresistible tune makes hers one of the most anticipated performances in the Outwith 22 music line up. Lawrence’s double duty as songwriter and producer also makes her one of the UK’s foremost independent alt-pop solo artists. Writing and recording in ‘The Coffin’ – her self-built garden shed home studio – she has released several critically acclaimed albums including the banger-packed Avalanche which includes the excellent Down for Fun.  The heartbreaking I Will Go On (below) will be familiar to many from the soundtrack of the Vampire Diaries.

Liz Lawrence will headline at 1703 as part of Outwith’s live music all dayer. Over 35 bands play live throughout the day and tickets cost just £20. You can get yours here.

Leaning into the afternoons: some Pablo Neruda for your Valentine's Day 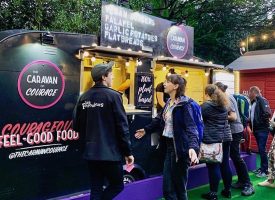 Tales from allotment 65 – on bird scaring and books

From Beatrix Potter to The Scottish Horse: A new home for the Dunkeld Community Archive