Tales from Allotment 65 – on gooseberries and slugs 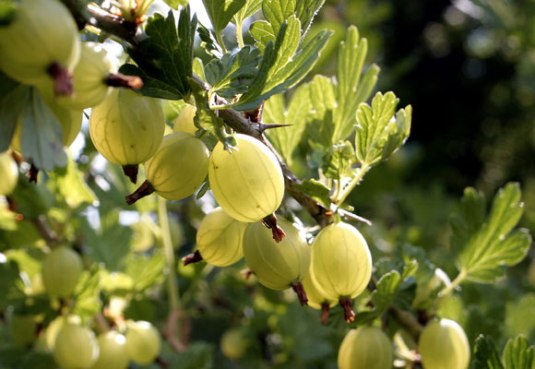 Nearly one month in and it is amazing how much we have achieved.

Our friend Craig has built a fantastic new net cage over the new gooseberry bush which is now bearing tiny wee green gooseberries. We’ve planted a globe artichoke in there too but it will be 2012 before we see any artichoke action.

I am taking great delight in making things from found stuff.   I salvaged some lovely old bricks from a neighbour’s skip and built a raised bed for lettuces, spinach and rocket, the seedlings of which are now showing through. The onions are doing well under their CD racks and showing a good 5-6 cm of growth. Green beans are valiantly trying hard to grow up their chicken wire support (another successful build  made from old tent poles!) No sign of the pea seeds I put in but all along where they are planted are fine deposits of bird poo, so I am assuming they made a lovely wood pigeon snack.  Nothing happening in the carrot beds either – will I have to bow to those nay-sayers who said carrots were too hard?

Potato leaves are pushing up through the earth. They seem to have been on the move under there and are no longer in the neat rows Lee planted them in – but as long they are growing I’m happy!  Butternut Squash, pumpkins and courgette plants are all doing well under their space man cloches.

Another allotment neighbour kindly gave me some surplus strawberry plants. They had been looking extremely sorry for themselves but after the recent gales they have perked up considerably and are looking almost chipper: masochists!  They are still bearing lots of flowers so hoping for bumper crops if the snails and slugs don’t get them.  I am getting increasingly distressed about what to do when I find a live slug or snail. I cannot bring myself to smash their pulpy bodies and sensitive eyes with a stone or spade and there’s never a handy wood pigeon nearby when you want one. Throwing them into the neighbour’s patch might get me barred from the place. I have tried to drown them which is probably more cruel but they just crawl out the bucket. I’m being a wimp I know – but has anyone got any ideas?

Oddly enough I’ve been having some issues getting hold of manure.  The zoo poo department are not returning calls and the City Farm have run out of well rotted manure so next stop is the local riding stables. Still no sign of legs on the (now huge) tadpoles but I did find out that when they get their ‘arms’ ie front legs, they pop out elbows first – imagine the relief when they finally get their hands free!

by Nicki Slater, The Imagination Workshop